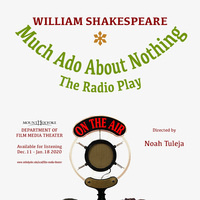 Auditions: Much Ado About Nothing

Interested in being considered for our radio version of Much Ado About Nothing? Choose one of the three monologues below, or another of your choosing from Much Ado About Nothing. Since this is purely an audio production, we are asking each person auditioning to prepare an audio file of your chosen monologue. What are your operative words? Where is the climactic moment of the piece? Who are you speaking to and what do you want from them? Clarity, pace and punctuation. If you would like further clarification of any of these directions feel free to reach out to Noah Tulega.

To be considered you must email your audio file to Noah Tulega by Wednesday, September 16.

Rehearsals will take place from 7-10 pm, 3–4 nights a week, between Monday and Thursday.

The final play audio file will be available on the MHC website from Dec. 7 - Jan. 23

Much Ado About Nothing (the radio play).
By William Shakespeare
Directed by Noah Tuleja
Roles for 12-15

Dost thou not suspect my place? dost thou not suspect my years? O that he were here to write me down an ass! But, masters, remember that I am an ass; though it be not written down, yet forget not that I am an ass. No, thou villain, thou art full of piety, as shall be proved upon thee by good witness. I am a wise fellow, and, which is more, an officer, and, which is more, a householder, and, which is more, as pretty a piece of flesh as any is in Messina, and one that knows the law, go to; and a rich fellow enough, go to; and a fellow that hath had losses, and one that hath two gowns and every thing handsome about him. Bring him away. O that I had been writ down an ass!

Not till God make men of some other metal than earth. Would it not grieve a woman to be overmastered with a pierce of valiant dust? to make an account of her life to a clod of wayward marl? No, uncle, I'll none: Adam's sons are my brethren; and, truly, I hold it a sin to match in my kindred. The fault will be in the music, cousin, if you be not wooed in good time: if the prince be too important, tell him there is measure in every thing and so dance out the answer. For, hear me, Hero: wooing, wedding, and repenting, is as a Scotch jig, a measure, and a cinque pace: the first suit is hot and hasty, like a Scotch jig, and full as fantastical; the wedding, mannerly-modest, as a measure, full of state and ancientry; and then comes repentance and, with his bad legs, falls into the cinque pace faster and faster, till he sinks into his grave.

I do much wonder that one man, seeing how much another man is a fool when he dedicates his behaviors to love, will, after he hath laughed at such shallow follies in others, become the argument of his own scorn by failing in love: and such a man is Claudio. I have known when there was no music with him but the drum and the fife; and now had he rather hear the tabour and the pipe: I have known when he would have walked ten mile a-foot to see a good armour; and now will he lie ten nights awake, carving the fashion of a new doublet. He was wont to speak plain and to the purpose, like an honest man and a soldier; and now is he turned orthography; his words are a very fantastical banquet, just so many strange dishes. May I be so converted and see with these eyes? I cannot tell; I think not: I will not be sworn, but love may transform me to an oyster; but I'll take my oath on it, till he have made an oyster of me, he shall never make me such a fool. One woman is fair, yet I am well; another is wise, yet I am well; another virtuous, yet I am well; but till all graces be in one woman, one woman shall not come in my grace. Rich she shall be, that's certain; wise, or I'll none; virtuous, or I'll never cheapen her; fair, or I'll never look on her; mild, or come not near me; noble, or not I for an angel; of good discourse, an excellent musician, and her hair shall be of what colour it please God. Ha! the prince and Monsieur Love! I will hide me in the arbour.