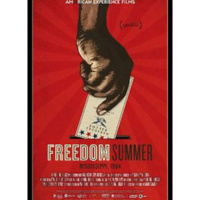 In 1964, less than 7% of Mississippi’s African Americans were registered to vote, compared to between 50 and 70% in other southern states. In many rural counties, African Americans made up the majority of the population and the segregationist white establishment was prepared to use any means necessary to keep them away from the polls and out of elected office.

For years, local civil rights workers had tried unsuccessfully to increase voter registration amongst African Americans. Those who wished to vote had to face the local registrar, an all-powerful white functionary who would often publish their names in the paper and pass the word on to their employers and bankers. And if loss of jobs and the threat of violence wasn’t enough to dissuade them, the complex and arcane testing policies were certain to keep them off the rolls.

In 1964, a new plan was hatched by Bob Moses, a local secretary for the Student Nonviolent Coordinating Committee. For ten weeks, white students from the North would join activists on the ground for a massive effort that would do what had been impossible so far: force the media and the country to take notice of the shocking violence and massive injustice taking place in Mississippi.