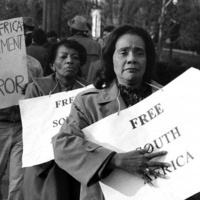 Coretta Scott King is often known as the widow of Dr. Martin Luther King Jr., but her story as an activist extends far beyond her proximal role in the movement for civil and human rights. This presentation will provide a close examination of her staunch activism for immigrant rights, women’s rights, marriage equality and the rights of Lesbian, Gay, Bisexual and Trans (LGBT) people. She once noted, “I’m not a ceremonial symbol, I’m an activist.” Join this insightful dialogue on the activist legacy of this trailblazing woman.