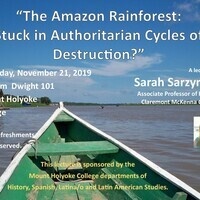 With the outbreak of forest fires, global alarms have recently decried the threats posed to the “lungs of the earth,” or the Amazon rainforest. Brazilian president Jair Bolsonaro’s response to global environmental concerns has been based on well-established arguments about national sovereignty. Such a move appears to be an echo of the military dictatorship’s (1964-1985) discourse and policies that encouraged large-scale development, environmental destruction, and violence against Amazonian inhabitants. When global environmental concerns about the Amazon were first expressed at the 1972 United Nations Conference on the Human Environment in Stockholm, Brazil’s military leaders acquired a leading position among global south nations. They argued that impoverished countries had the right to pursue development projects to promote economic growth. To answer the question about why current political debates over the Amazon seem to be stuck in a Groundhog Day warp, Prof. Sarzynski turns to a historical media analysis of representations of the Amazon and its people. A gendered analysis of global media representations of the Amazon in the 1970s suggests the limitations of using stereotypes. To disrupt the repetitive cycle of such crises and debate, Sarzynski argues, it is imperative to learn from past mistakes, challenge entrenched Western tropes to represent the Amazon, and look for solutions beyond neoliberal “green” capitalism.