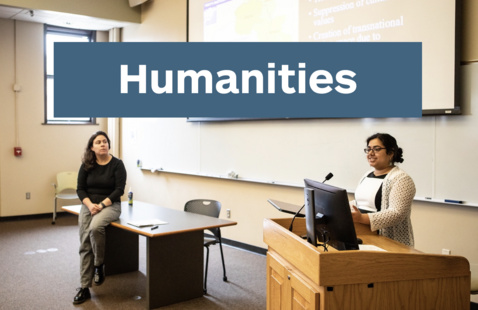 This project evaluates current research on the incarceration of Indigenous peoples and programs supporting the creation of art and culture in prisons. I am working with professor of anthropology Sabra Thorner on a larger project regarding the disproportionate incarceration of people of color, the theoretical purpose and real effects of prisons, and the impact of art projects to connect incarcerated Indigenous Australians to their culture. My work reviews research on projects such as the Bard Prison Initiative and the New York Theological Seminary at Sing Sing, as well as art programs such as The Torch in Australia and SpeakOut! Journal in the United States. The project compiles and reviews academic discussion of these efforts and their impacts upon both people who are or formerly were imprisoned, but also the way in which activists and academics view prisons systems around the world. The project asks what ideological and pedagogical approaches are used in prisons and rehabilitation programs, and how much reflection and academic research is being produced in the field regarding reshaping those ideologies and the structures they create. This semester-long independent study creates a collection of sources examining the importance of culture for incarcerated Indigenous peoples as a social justice issue vital to the humanity of individuals and the survival of cultures.

The ideologies used in a Marxist framework regarding dominance in the workforce, and who maintains control is still prominent in work environments today, and the means by which this occurs contributes to occupational stress1 The idea of traditional authoritative relationships using hierarchical structures and Taylorist control have now been updated for a post-industrial society, reflecting more team-work environments aiming at reducing stress in the workforce. This is done by providing a greater perception of worker autonomy and front-line empowerment2

Building upon literature that establishes the difference between autonomy and authority as forms of workplace control, I use General Social Survey data to explore how these variables influence employee well-being. Specifically, I test the hypothesis that a high level of autonomy in the workplace is associated with lower levels of stress, while high levels of authority would lead to the opposite.

My project aims to understand employee stress through a sociological lens. This question is important to look at sociologically in order to understand how organizational structures in the workplace influence employee stress – a variable more often examined psychologically as an individualistic and internal trait instead of as a product of social relations. Looking at stress as a purely individualistic concept continues to ignore the effects of socio-psychological factors such as socioeconomic status and social class3. This individualized approach also avoids the need for collective industrial action or even necessary political change in order to handle work related struggles4 .

My thesis project started as an attempt to discover whether the antifa movement had a goal beyond “smashing” fascists. It was obviously about fighting against fascism, but was it fighting for something as well?

What I eventually found was that at the heart of the antifa movement is a vision of a liberatory future where all can be free of the fascist threat and any form of oppression. This means achieving liberation for people of all races, genders, sexualities, classes, abilities, religions, citizenship status, and ethnic origins. This goal, as will be explained, is heavily influenced by the anarchist ideology of many militant antifascists past and present. It is also inherently antifascist, as it amounts to the building of a future that is the antithesis of the one that fascists envision. It also goes beyond “smashing” fascism by formulating what society should ideally look like and how to lay the groundwork to get there.

My thesis seeks to establish an understanding of the antifa movement as not just reactive but proactive through an analysis of the growth and role of its liberatory vision as a driving force. To do this, primary and secondary sources from both within and without the movement were used. Secondary sources included academic articles or books by scholars studying antifa or antifascism, news reports, investigations, and interviews while primary sources were made up of books and articles or blog posts written by those within the movement for consumption by antifa activists as well as Twitter posts and zines. Using a qualitative method, my thesis examines the development of antifa’s liberatory vision throughout the history of the movement, it’s role in recent antifa activism such as in protests against Trump and the BLM movement and the projects of community protection and mutual aid. It then lays out how the antifa movement seeks to build the liberatory future it envisions. This vision is found to be a product of the prevalence of an anarchist ideology, the growing diversity and intersectionality of the movement, a growing recognition of the threat fascism posed to different groups, and the emergence of other social movements or activist groups that provided inspiration. A growing sense of fascism’s threat has been accompanied by opposition beyond strictly fascist groups to those with fascistic ideologies and those that support ideas or activities that can cultivate a fascistic culture. At the same time, a culture based on liberatory goals and values has formed that is embodied in work around community protection and mutual aid. Ultimately, culture is shown to be the key to building a liberatory future through the embodiment of liberatory values in antifa and anti-fascists spaces, cultural work and education that reaches out to communities, and the promotion of popular antifascism. The goal is to create a society that rejects fascism and which all people are liberated from the oppression and violence promoted by it.

In most United States cities, the use of public space is restricted by policies such as loitering ordinances and bans on public sleeping and camping1 Many of these policies primarily target people who are unhoused or housing insecure and use public places (such as parks or transit stations) for activities like sleeping that housed people typically do in private dwellings. People who engage in these restricted behaviors are sometimes labeled as “public nuisances” or otherwise stigmatized2 Such restrictions and stigma limit opportunities to freely use public spaces for everyone by creating a climate of “social paranoia”3 in which individuals regard anyone using public space with suspicion. This context of paranoia, stigma, and criminalization has concerning implications for both unhoused people’s rights and well-being and the development of connected communities and a functional public sphere.

This project examines the ways people respond to formal and informal limitations on the use of public spaces, and the role these responses might play in shaping new definitions of urban public space and community. My research focuses on two case studies: The response to the potential displacement of a tent encampment in Northampton, Massachusetts, and the use of a park frequented by unhoused people in Atlanta, Georgia to facilitate the provision of social services. Through content and discourse analysis of news and social media coverage of these movements and projects, situated in the legal and social contexts of these cities, I connect anti-unhoused policies and practices to what some have described as the “death” of public space4 In examining responses and resistance to a restrictive and atomizing climate, I seek to contribute to an understanding of how the use, meanings, and significance of public space are questioned and determined through processes of negotiation and contestation.