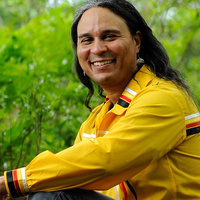 Indigenous Heritage Month Keynote: "We Are Still Here, We Are the Story and We Are the Land: Honoring the Past, Present and Future of the Indigenous People of Western Massachusetts"

Born and raised in Springfield, Massachusetts, Larry Spotted Crow Mann is an author, musician, activist and community engaged leader. A member of the Nipmuc tribe, he also co-directs the Okheteau Cultural Center, which offers classes, workshops and a space for the Indigenous community to connect. The Nipmuc (which means ‘Fresh Water” people) exists as an indigenous community in Central Massachusetts. Their ancestral land once comprised over 1000 square miles from northern Rhode Island, Connecticut, central Massachusetts and southern New Hampshire. As Larry Spotted Crow Mann reflects on the presence and vitality of the Nipmuch people and other Indigenous tribes of Western Massachusetts, he continues to combat the stereotype that all Native Americans are gone from the area. Telling traditional stories, he educates those around him about the historic and contemporary legacy of the Indigenous people of Western Massachusetts.

Before the lecture, there will be a special memorial and reflection in honor of the Indigenous ancestor whose remains were recently repatriated from Mount Holyoke to the Stockbridge Munsee tribe in community with the Nipmuc.

You're not going yet!

Register
This event content is powered by the Localist Community Event Platform.