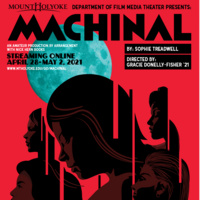 Sophie Treadwell’s great expressionist play Machinal makes a beginning out of an ending. In 1928 a reporter for the New York Daily News smuggled a camera into Sing Sing prison strapped to his ankle. His aim: to capture an image of the infamous Ruth Snyder in the electric chair as she was executed for the murder of her husband. The journalist succeeded, and his front-page photograph of Snyder, bound to the chair and rendered anonymous by a hood placed over her head, would provide inspiration to Treadwell. Her play, staged later that same year, offers a counter-narrative of sorts, not the tale of a monster but of a very ordinary young woman whose very ordinary life, which we follow through nine scenes, puts her on a factory-like conveyer belt to murder and execution. She persistently dreams of freedom, but is it possible ever to find joy and passion, to escape the machine?