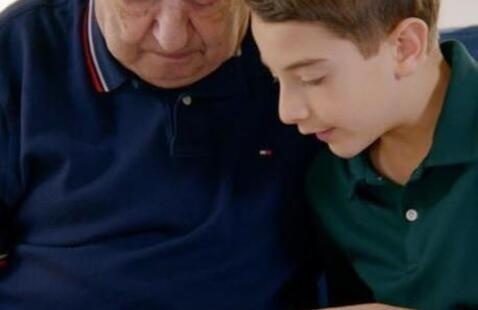 When ten-year-old Elliott asks his 90-year-old great-grandfather, Jack, about the number tattooed on his arm, he sparks an intimate conversation about Jack’s life that spans happy memories of childhood in Poland, the loss of his family, surviving Auschwitz and finding a new life in America.

Directed and produced by Emmy winner Amy Schatz, the short film The Number on Great-Grandpa’s Arm interweaves haunting historical footage and hand-painted animation to tell a heartbreaking story of Jewish life in Eastern Europe, sharing memories and lessons of the Holocaust with a new generation.
Jack’s story is brought to life through documentary and archival footage and stills, as well as the dynamic rotoscope animation of acclaimed artist Jeff Scher.

The Number on Great-Grandpa’s Arm is the centerpiece for a new installation at the Museum of Jewish Heritage — A Living Memorial to the Holocaust, which includes the film, its animation art, and companion segments produced by HBO featuring survivors in conversation with young people.

Director-producer Amy Schatz’s notable HBO projects include the recent Saving My Tomorrow series, plus An Apology to Elephants, the Classical Baby series, A Child’s Garden of Poetry, ‘Twas the Night, Goodnight Moon and Other Sleepytime Tales and Through a Child’s Eyes: September 11, 2001. Her work has won five DGA Awards, seven Emmy Awards and three Peabody Awards.

Animator Jeff Scher’s work is found in the permanent collections of the Museum of Modern Art, Academy Film Archive, Harvard Film Archives and the Pompidou Centre.

You can access this film via youTube or HBO.com. We will also screen this short film at 11:00am and provide resources to learn about the Holocaust. Please register and join by Zoom.