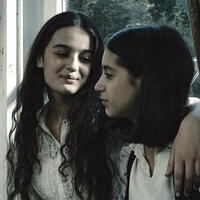 This film follows inseparable friends Eka and Natia, both fourteen years old and at the end of their childhood in early nineties Tbilisi, the capital of the newly independent Georgia after the collapse of the Soviet Union. The country is facing violence, war on the Black Sea coast (Abkhazia) and vigilante justice that plagues society. But for Eka and Natia, life just unfolds: in the street, at school, with friends or elder sisters who are already dealing with male dominance, early marriage and disillusioned love. For these two girls in bloom, life just goes on…. (Running time 1h42m)