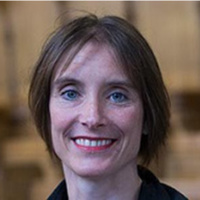 French Through the Texts of Music. Our speaker this week is Julia Prest, Professor of French and Carribean Studies at the University of St. Andrews.

Julia Prest’s love of French and Music has led her to extraordinary work on Gluck’s Parisian operas, Moliére’s comedy-ballets and the ballets and operas of creole theatre. Julia is currently working on the public theatre tradition in the former French slave colony of Saint-Domingue (now Haiti) where, in the late eighteenth century, over 700 different works were performed in different towns across the island by professional theatre troupes before mixed but segregated audiences.

Sonic Vanguard is a new speaker series that explores the work of some of the most active creators and scholars of music today. In a time of increasing cross pollination between music and other disciplines, speakers discuss the myriad influences that continue to impact their work today.

Students taking Music 199 - Sonic Vanguard interact with some of the musicians/artists/scholars featured in conversation about the turning points in their professional lives and the choices that continue to influence the course of their careers.

You're not going yet!

Register
This event content is powered by the Localist Community Event Platform.