An East Coast Premiere of “Summoned, Frances Perkins and the General Welfare”

By Weissman Center for Leadership 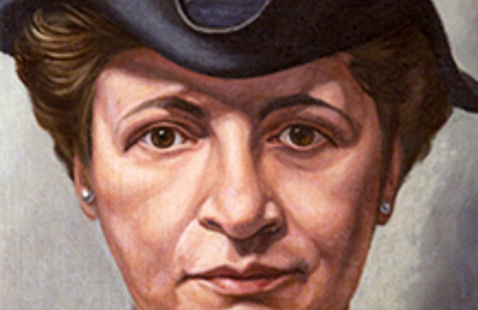 We are delighted to celebrate the 20th Anniversary of the Weissman Center for Leadership with a pre-broadcast documentary screening on the life, work, and leadership of Frances Perkins, class of 1902. As Secretary of Labor, Frances Perkins was the first woman to hold a U.S. Cabinet position. This documentary reveals how Mount Holyoke College shaped Perkins' worldview, details the social causes which she championed, and presents her leadership legacy today through featured interviews with House Speaker Nancy Pelosi, former Senator George Mitchell (Maine), New York Times columnist David Brooks, and MSNBC television host and political commentator Lawrence O’Donnell.

Frances Perkins, Class of 1902, began her political life before she had the legal right to vote. In 1898 she enrolled at Mount Holyoke, the country's oldest women's college. At Mount Holyoke, Perkins was deeply influenced by an economic history course that required her to survey working conditions in the nearby industrial city of Holyoke. She was also affected by reading about the suffering caused by poverty, unfair labor practices, and unhealthy living conditions. In her senior year, she heard an address by Florence Kelley, head of the National Consumer's League, a women's group that advocated for decent wages and working conditions. Perkins became a convert to Kelley's cause.

With the support of Franklin Roosevelt, she became the first woman cabinet member in a male-dominated world of labor. But she went far beyond labor to become a major inspiration and driving force behind the creation of Social Security and the programs of the New Deal. Perkins helped to transform the role of government and changed the basic social contract with its citizens.

“Summoned: Frances Perkins and the General Welfare” Directed by filmmaker Mick Caouette, is the story of the first woman cabinet member and the force behind the American Social Safety Net. The fundamental rights, which she championed, are now woven into the fabric of every American life, yet when a sign at a recent campaign rally read “Keep government out of my Medicare” it is clear that many Americans do not understand the origins of these rights or their justification. There is no better way to explore their meaning and rationale than by examining the life of a woman who made them possible. Combining her own voice (from archival tapes) with those of biographers and those who knew her personally, the intent of this one hour film is to provide historical context for the debate over the myriad of labor and social welfare issues that are pervasive in our contemporary conversation.

Today there is constant debate over the rise of the federal minimum wage. In 1938 the idea was considered radical and anti-business, yet Frances Perkins was able to overcame bitter opposition and lead the fight to include it in the Fair Labor Standards Act of 1938 – an act that also established a maximum 40-hour workweek.

Fire codes in the workplace that save thousands of lives every year rose from the ashes of the Triangle Shirtwaist Fire of 1911. In 1913, Frances Perkins, supported by President Theodore Roosevelt, became a founding member of the New York Factory Investigating Committee, creating 30 laws that set workplace fire standards that are now recognized worldwide.

When she saw ten-year-old girls working in sweatshops and boys working in the mines, Frances Perkins worked tirelessly to create laws making child labor illegal. And when she saw a worker lose a hand in an industrial accident without being compensated, she fought to create a safer workplace and the enactment of Federal Workman’s Compensation legislation.

Now Social Security and its descendant Medicare, are providing an aging population with a sense of dignity and security that extends far beyond their working years — a protection that would not be the law of the land without the will and persistence of Frances Perkins.

Naomi M. Barry-Pérez ’96 currently serves as the director of civil rights for the U.S. Department of Labor. In this role she has been responsible for administering the Department of Labor's Internal Equal Employment Opportunity (EEO) programs and ensuring Equal Opportunity (EO) in the Department's financially assisted and conducted programs. Ms. Barry-Pérez has also been responsible for coordinating efforts that pertain to persons with limited English proficiency (LEP) and migrant/seasonal farmworkers. Pursuant to Executive Order 13166, Barry-Pérez spearheaded development of the Department of Labor's Policy Guidance to federal financial assistance recipients regarding the prohibition against national origin discrimination affecting LEP individuals. She also created the Department's plan for improving the accessibility of federally conducted programs for LEP persons.

Barry-Pérez holds a bachelor's degree in politics (cum laude) from Mount Holyoke College and a master's degree in public administration from the Maxwell School of Citizenship and Public Affairs at Syracuse University. In addition, she held a Public Interest Law Fellowship at the Georgetown University Law Center where she received a Juris Doctor Degree. Ms. Barry-Pérez is the recipient of numerous National awards, including the inaugural Federal Employee Leadership Award given by the National Farmworker Conference, a National Hispanic Scholarship, a Harry S Truman Scholarship for Public Service, and a Woodrow Wilson Fellowship for Public Policy. Ms. Barry-Pérez was awarded the Distinguished Alumnus Award from the Congressional Hispanic Caucus Institute in 2013.

Sarita Gupta ’96 is the Director of the Future of Work(ers) program at the Ford Foundation. She is the co-founder of Caring Across Generations and has served as the Executive Director of Jobs With Justice.

As a key leader and strategist in the progressive, labor, economic justice, women’s and caregiving movements, Sarita has appeared on MSNBC, Al Jazeera America, PBS, CNBC and Fox News, has been featured in The Wall Street Journal, Bloomberg, and Politico, and has been published in The Huffington Post, The Hill and BillMoyers.com, and regularly speaks at conferences, panels, and events, including the White House Conference on Aging, the White House Summit on Worker Voice, and the United State of Women Summit.

Sarita began her career in the student movement while she was studying at Mount Holyoke College (1992-1996). After graduation, she was elected president of the United States Student Association (1996-1998), representing students on Capitol Hill, at the Department of Education, and the White House. She deepened her role as a community activist and grassroots organizer while holding several leadership positions at Chicago Jobs With Justice, and then with the national Jobs With Justice organization, where she was named executive director in 2007.

Maria Z. Mossaides ’73 currently serves as the child advocate for Massachusetts. In her four-decade career, Mossaides has held a wide range of positions in both the public and independent sectors as both an attorney and administrator, including her appointment as the first woman to serve as executive director for Massachusetts’s highest court. She holds a B.A. from Mount Holyoke College, J.D. from SUNY at Buffalo and an M.P.A. from Harvard University Kennedy School of Government. She was recognized as a Top Woman of Law in Massachusetts for 2010 and received an Alumnae Medal of Honor from Mount Holyoke College in 2018 and a Loyalty Award in 2008. Mossaides also teaches public law and nonprofit governance in the graduate management program at Suffolk University.