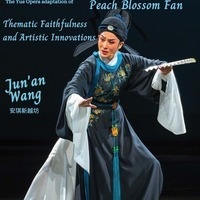 “Thematic Faithfulness and Artistic Innovations,” a talk by Jun’an Wang, who is a premier member of the Fujian Fanghua Yue Opera Troupe of China.

The talk is open to faculty and staff of Mount Holyoke College and the Five College Consortium.

Jun’an Wang specialized in young male lead roles at the Yin School. She joined the Fanghua Yue Opera Troupe in 1981, and started to work on stage in 1986, playing young male lead roles in more than ten Yue Opera classics as well as contemporary plays, and winning numerous provincial and national awards, including the coveted Wenhua Award for the Performing Arts bestowed by the Chinese Ministry of Culture and the Chinese Drama Plum Blossom Award for Performance the highest award for Chinese theater arts. She acquired national renown as one of the best Yue Opera artists in China, and was named as a “living transmitter of non-material cultural heritage” in 2008 for her efforts in promoting and teaching the Yin style of Yue Opera. Wang Jun’an studied, lived, and worked in the United States from 1996 to 2003 before returning to China and her career on stage, which has included a celebrated solo performance in 2010, as well as leading a new play, Liu Yong, on a national tour of more than 50 performances in 2012-2013. Over the course of her career, she has used a diverse array of mediums, including broadcasting, television, the internet, and DVDs, to promote the artistry of Yue Opera to different audiences throughout China. She returned to the United States in 2011 to play the male lead in the opera Butterfly Lovers, and was invited to Mount Holyoke College to teach an open class, entitled “Cross Gender Performance in Yue Opera,” in April 2014. She was selected to be the 2014-2015 Five College Multicultural Theater Artist and was invited to the Pioneer Valley for four days (March 25-28) in the spring of 2015, during which she hosted lectures at Amherst College and Mount Holyoke College, and visited classes on two campuses (University of Massachusetts and Mount Holyoke College).