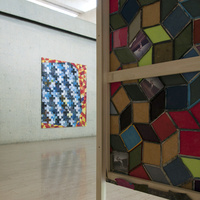 Jonathan VanDyke, a visual artist based in New York City, will present the lecture “Into Painting, Into Performance”.

Van Dyke's recent solo exhibitions have appeared at 1/9unosunove in Rome, Loock Galerie Berlin, Tops Gallery in Memphis, Four Boxes Gallery in Denmark, and Scaramouche in New York. Recent solo performances and commissions have appeared at The Columbus Museum in Georgia, Storm King Art Center, Este Arte in Uruguay, The Power Plant in Toronto, Vox Populi in Philadelphia, The National Academy Museum in New York, and The Albright-Knox Art Gallery. His work has been featured in many group exhibitions, including Queer Abstraction, a major survey at The Des Moines Art Center.