Why Russia's War on Ukraine concerns us all? 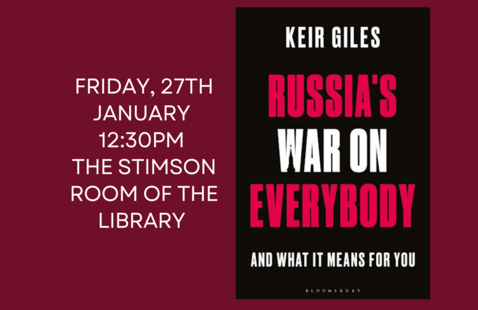 Keir Giles, currently a fellow with the Russia and Eurasia Programme at the Chatham House international affairs institute in London and a regular commentator on Russian affairs for international media, will be discussing implications of Russia's war on Ukraine not only for all of us.

Russia’s assault on Ukraine has reminded the world about the threat it faces from Moscow. But that’s not the only war that Russia has been fighting and Ukraine is not the only target. Long before February 2022, Russia was already engaged in semi-covert campaigns around the world, using any means possible to expand its power and influence and leaving a trail of destruction along the way. Instead of talking only to diplomats, politicians and generals, Keir has also looked at the effect of Russia’s ambition on ordinary people throughout the world through corruption, disinformation, cyber offensives and more.

In his new book Russia’s War on Everybody, Giles examines what this longer war means for us all. He will introduce the book and its findings, and take questions on what he has learned over three decades of studying Russia and how it tries to get its way at all of our expense.